In the fall of 2019, fellow Saturday Market vendor Eli Mazet showed me a straightforward way to make hummingbirds using clear glass. I wish I still had one, or at least a photo to share, but if you attend the Saturday Market and visit Eli’s booth, look at his hummingbird sculptures; you will see my starting point. At the same time, another Market vendor encouraged me to keep going. “Try adding color.”

So I did. The out-of-print classic Hummingbirds by Crawford H. Greenewalt perfectly illustrates some of the different postures of flying hummingbirds. Perching copies of Greenewalt’s illustrations on my bench, I experimented with different colors, referencing his side and top view views of the birds hovering, flying full speed ahead, flying in reverse and breaking away in defensive upside-down somersault moves. 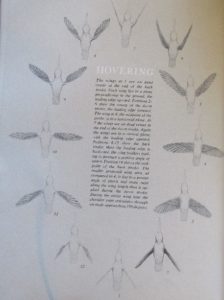 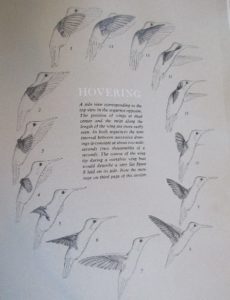 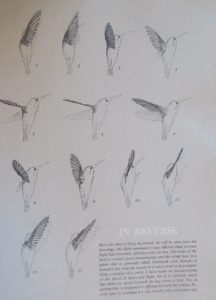 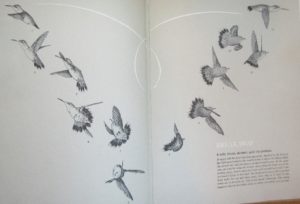 Greenwalt himself was something of an innovator in the world of hummingbird photography. While we often take images and film of hummingbirds for granted today, it is only relatively recently that we have been able to capture them in any detail at all. Greenwalt managed to capture crisp, colorful photos of the birds in the 1950s, well before smartphones and digital cameras. As for his definitive illustrations (pictured above) Greenwalt achieved those by building on work by another innovator: Harold Edgerton.

Inventor of the modern photographic strobe flash, Edgerton was the first to apply his technology to the filming of hummingbirds in the 1930’s. Then, in the 1950s, Greenewalt equipped a wind tunnel with a hummingbird feeder on one end and into the other released a female Ruby-throat. As she flew into the 0 to 30 mph headwinds, he made high speed movies, freezing the hummingbird wings with Edgerton’s flash photography technology. Greenewalt published his flight research in Hummingbirds in 1960 while serving as president (later to become the Chairman of the board) at the Du Pont Company.

Here are some of my results of the hovering bird: 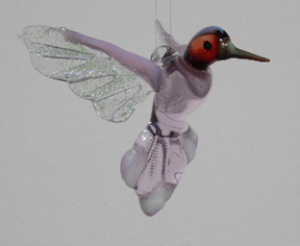 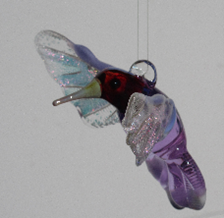 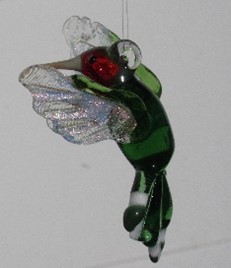 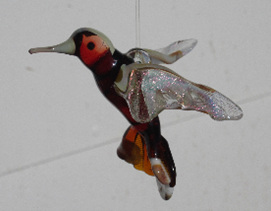 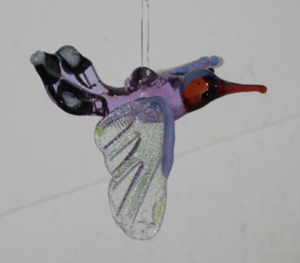 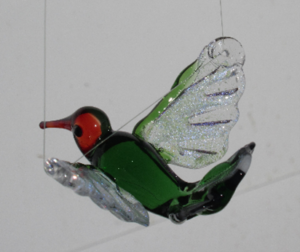 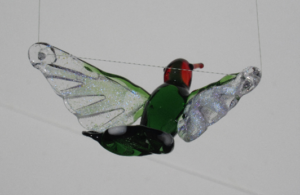 I use dichroic glass to light up these birds with iridescence. Living hummingbird’s iridescence is on their heads and gorgets, but since my supply of dichroic glass is limited to flats sheets, it’s the wings of my birds that get the sparkle. The wings are crafted from 2 thin triangular shapes of dichroic glass stacked and melted together with the metal oxide on the inside to keep it from burning off. The wings are attached to ½” diameter colored rods that have been sculpted and flame worked at 3000° Fahrenheit to make their body, head, and tail. It’s been a matter of experimentation to find those balance points that makes the birds hang properly, and thankfully I have Greenewalt photos and illustrations to help me get them just right.

Category: Uncategorized
Leave a Reply Cancel reply
Do you like Hummingbirds?

Or maybe you like beautiful handblown glass? Or perhaps you need a gift for someone who is IMPOSSIBLE to shop for? All of the above? You’re in the right place!

These pieces are all one-of-a-kind. The purchased product will match the color and decoration piece, but placement will vary. See Our FAQ for details. Dismiss